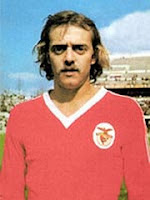 Just as the players needed to relax a little, today provides a narrow window of opportunity between home games to reflect on matters only peripherally connected with Charlton. These are centred around a romantic Valentine’s Day break in Lisbon - or cheap, last-minute, unimaginative Xmas present for my French partner Suzanne, depending on your assessment of my true nature (she after all came up with two tickets for the France v England Six Nations rugby match in Paris coming up; the deal is I go in a France shirt and her in an England one, so if the cameras focus on a lady in an England shirt belting out La Marseillais you know what’s going on, although of course like all sensible people you will all be at the Charlton v Gillingham match, which I shall have to forego) – and a chance encounter with Portugal’s answer to King Arthur (not of course the mythical ancient sword-in-the-stone one responsible for turning the entire south-west of England into an asylum for tree-hugging, crystal-worshipping weirdos).

It was my first time in Lisbon (indeed, in Portugal) and truly splendid it was too. Cheap flights, very cheap hotels, a city manageable in size for a weekend, with a charming old quarter (including an enormous flea market if you feel a need for 10-year-old mobiles and assorted used drill bits), and best of all friendly and extremely laid-back people, which makes for a relaxed atmosphere in which to chill out. Even the street drugs sellers took a simple ‘no thanks’ for an answer and I loved the small bars which only sell a cup of cherry liquor, which did simplify the decision-making process. There are also the delights of Fado music, of which I knew/know nothing. It’s always fun to speculate on what the songs might actually be about – but slightly disconcerting that Suzanne always says ‘it begins with the man having done something very bad’. Just a couple of tips for prospective visitors: first, if you opt for the open-topped tourist bus in February, remember to wrap up very well; and unfortunately the much-anticipated Institute of Port seems to have shut for good.

Appropriately Suzanne chose the restaurant for Valentine’s night. She shunned the obvious options offering traditional Portuguese cuisine (especially those which included a ham omelette on the traditional menu) and instead opted for a less conspicuous bistro-style outlet, on the grounds that she thought it looked like it had a loyal, local clientele. Turns out it was their opening night. It also turns out that it was owned by a former Portugal international, who introduced himself as ‘Artur ... without the h’.

On my return I did the usual searches to see if I could find out more about him. ‘Artur, Portugal, footballer’ threw up plenty of options, mostly pointing towards a certain ‘King Artur’ Jorge, a striker who played for Porto, Academica and Benfica, who made 16 appearances for Portugal and who went on to manage (among others) Porto, Portugal, Switzerland, Cameroon and Iran. A recent photo showed a healthy-looking 64-year-old with a truly splendid tash. Looking at the pictures it just didn’t seem like our guy; and further investigation revealed a more promising alternative: a certain Artur Manuel Soares Correia. The photo of him I found (as above) looked more familiar, even though unfortunately our restaurant owner has suffered a stroke and now doesn’t move too fast.

Now this Artur had no mean career either (and like the other one he was included in a recent poll of Portugal’s 100 best-ever players), winning 35 caps as a right-back. One site talks of him as a player well-known for giving all he had, being expert in the tackle and formidable in the chase. I guess that’s tantamount to being a bit on the combative side. In my conversation with him he said he had played against England and Scotland – and listed in Scotland’s international matches is a game played at Hamden Park on 13 May 1975, which Scotland won 1-0 courtesy of an own goal by a certain Artur Correia (he didn’t mention that). He talked of playing against Francis Lee (‘ee was dirty, ee punched me’, which sounded authentic; I asked if he punched him back and he said ‘later’).

Artur – like everyone else we encountered – said he knew Jorge Costa well (it seems he is now managing a team in the south of the country, SC Olhanese, having previously been sacked as manager of Sporting Clube de Braga) and remembered that he had a spell on loan in England. Unfortunately he didn’t seem to recognise the name of Jose Semedo, but I put him right on that count.

So, if anyone’s planning a trip to Lisbon take time to check out Artur’s restaurant. Only don’t wait too long. I know less about the restaurant business than I do about football, but it did strike me that on opening night at least there were still one or two gremlins. Like a front door which didn’t open from the outside and a less than enthusiastic response from Artur when it came to opening it for potential customers (he was talking to me at our table when a group tried to get in and said ‘they can wait’), while we were told (having sat down early by Portuguese standards) that the cod dish was ‘finished’ (not getting cod in Lisbon is a bit like going to Brick Lane only to discover that curries are ‘off’). Wouldn’t have missed it for the world.
Posted by Blackheath Addicted at 13:50