Very sad to hear the news that Matt Tees has died, aged 81. Condolences and best wishes to all his family. I have no doubt that fans of all the other clubs he played for (primarily Grimsby and Luton) will be feeling the same as every Addick who ever saw him play. The record shows 89 appearances for us and 32 goals. Pretty decent return, but the numbers can’t convey what a heart he had, taking regular clatterings against much bigger centre-halves and dusting himself down and getting on with it. He was my first true Charlton hero.

By pure chance I’ve been doing some repairs on scrapbooks I kept covering the 1960s and 70s. So a few snippets are to hand. Manager Eddie Firmani admitted a mistake in selling Tees, in 1969, to Luton for £25,000, although it seemed Matt and his family hadn’t been able to settle in London and he had been looking for a transfer the previous season – only to take himself off the list to play his part in the promotion drive in 1968/69 (we ended up third with Derby and some other team going up). The situation had been confused by our bringing in Ray Crawford, who was to be fired by the club, and apparently Firmani’s plan to sign John O’Rourke from Ipswich (which fell through).

The glory games were when he was paired with Ray Treacy. In Treacy’s own words “I live off Matt Tees … he’s right in there, taking a helluva lot of stick. He’s brilliant in the air. Most of the chances I get come from Matt.” In the same article Tees himself commented that “I could do with a bit more weight myself really because when they hit me I go straight over”.  He did, but he got back up again, every time.

That glorious season was remarkable for me as a kid, it was the first time that I thought it might be possible we would win something (I had been reared on desperate battles to avoid relegation). Like Tees’ stay with us it didn’t last. Without him normal service was resumed the following season as we finished third from bottom (repeated that in the following season, finally relegated in 1971/72). But it was great while it lasted. And although we’ve had great goalscorers since I think it was not until Yann Kermorgant turned up at our place that we had a real successor to Matt. 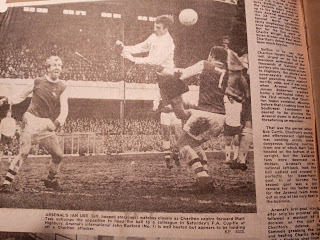 Posted by Blackheath Addicted at 18:47

we must be the same vintage, but you've got a better memory for detail. Great player