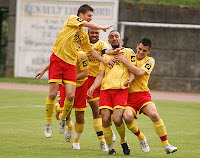 So, was it a bottle of Saint Joseph to celebrate promotion with Lyon la Duchere, my adopted French team, or a bottle of Beaujolais to commiserate with them on their failure? I suppose the outcome was never really in doubt. I drank both, before the game started. And this proved to be the appropriate action – as to end any attempt at suspense Villefranche took the title but La Duch beat Marseilles reserves 1-0 to take second place and promotion with Villefranche from CFA2 Groupe C to CFA proper, the French equivalent of the fourth division. All’s well that ends well as they say – and with Olympique Lyonnais somehow robbing Paris Saint-Germain to win the French cup (and with it the league and cup double) the evening did indeed end well (and by the sound of it so has the weekend in general as we don’t have to contemplate going to Leeds).

First the facts. I managed to find out a little more by taking a stroll to check out the Stade Balmont (which in truth is a municipal stadium with one stand plus terracing opposite and nothing behind the goals) the day before the game and having a conversation outside the ground with someone I think turned out to be the manager of Lyon Duchere. It seemed that the team finishing top of the group was guaranteed promotion but that there were extra places from the eight regional CFA2 divisions for second-placed teams with the best record. It seemed that Lyon Duchere were confident of gaining promotion that way if they finished second – which meant it was in their own hands and that it was indeed a promotion play-off with Marseilles reserves.

Some 400 brave souls, including three wearing Charlton shirts (something that did require periodic explanation), shunned the town centre big screen to watch the cup final and to cheer on La Duch. Marseilles’ second-string were younger, fitter, stronger, and had in their ranks by far the best player on the pitch, an outstanding prospect called M’Bow (Pards please note, he plays in central defence and is tall, very mobile, and is going to be a star – provided his temperament doesn’t get the better of him, more of that later). However, La Duch had the heroes on the night.
The first half was a fairly even and open affair, but Lyon Duchere had made the breakthrough in the 14th minute, with Rachid Benayen dummying the Marseilles keeper and slotting the ball to his left. After that chances were few and far between, which seemed par for the course for Duchere through the season. After the break Marseilles took more of a grip on the game as Duchere not surprisingly tended to sit back and tried to see out the game and as fatigue played a part. And in the last 15 minutes it was the Duchere goalkeeper Daniel Jaccard (who apparently joined the club this season and who has been instrumental in their splendid defensive record) who stepped up. He pulled off one truly outstanding save, palming away a fierce drive headed for the top corner, and three or four pretty commendable ones as well.

Everyone was well aware of the consequences of a Marseilles equaliser and nerves were frayed as the minutes were counted down. Some controversial cries of ‘go back to your bouillabaisse’ were heard from the grandstand and as Lyon Duchere’s time-wasting tactics reached new heights there was the odd scuffle on the pitch. The referee seemed to add on at least five extra minutes. But finally it was over and Lyon Duchere had emerged triumphant. More contretemps followed after the final whistle, with M’Bow in particular not taking defeat well and having to be ushered off the pitch.

For the record Villefranche did what was necessary for them, securing a 1-0 away win at Gueugnon. It seems that the referee there disallowed a last-minute equaliser; if that had stood Lyon Duchere would have taken the title. I believe the final standings were as follows (if that sounds vague its because one of the Lyon Sunday papers has La Duche winning the league):

And so it ends. Next season Lyon Duchere will have to step up a gear, but the season should be highly entertaining. There are four 18-team regional CFA divisions and I’m assuming La Duch will go into Groupe B. There will be the friendly fixtures against Villefranche (well, if they aren’t friendly yet I will do all in my power to make them so) and more important Duchere will come up against the reserves of Lyon. It promises to be something of a grudge match, given the disdain with which OL treats Duchere.

The Duchere area is in the north-west of Lyon, in hills overlooking the centre. It has been relatively depressed for decades (the keyword being relative: Lyon does not have the problems of Paris and is an affluent and extremely appealing city, being well-presented and the acknowledged food capital of France). But large housing developments are being demolished and fresh areas constructed with better planning and construction. The district has every chance of becoming a real growth area with a vibrant and diverse cultural mix. Looks like the same can be said of its football team.

I hope to provide regular updates on the progress of Lyon Duchere through the course of next season, attending matches when possible (now I have the scarf – they don’t sell the shirts yet). This does of course rely on my partner Suzanne not coming to her senses and disposing of her rather strange rosbif. But there are no signs of this being about to happen (that said we never do see them coming, do we? Better get her a decent birthday present just to be on the safe side).
Posted by Blackheath Addicted at 19:00

Hope you drank the Beaujolais first, and slightly chilled. The St. Joseph would have overpowered the Gamay if you'd drunk that first! ;-) I share your love of the city of Lyon (tho' not of La Duchere), my weakness in football teams is for Chateauroux and I also have a soft spot for St Etienne ever since the days of the sublime Dominique Rocheteau.

St Etienne back in Europe for the first time in aeons - good to see.

And congrats to La Duch BA.

Drop me an email at forever@charlton.net. I have an invite for you to an event at the club for bloggers