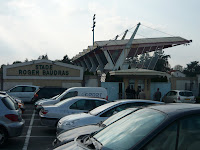 Even after seven games the table doesn’t really lie, in England or in France. Well, arguably it doesn’t really lie after one game (unless of course Palace aren’t bottom). I think I’m trying to say (and contrary to popular belief these thoughts are not always influenced by wine or puff) that I don’t know whether to be pleased that we have made a reasonable start to the season or disappointed not to be topping the table. It’s always the latter of course, but a more sober assessment would be it could be worse, could be better. I just really don’t know what is realistic to expect for this season (and the confusion is compounded by having the same ambitions at the start of the season as Simon Jordan – namely to see Simon Jordan leave football). At the moment we really do have to take each game as it comes and see where we are as January approaches. Hopefully we will be there or thereabouts and maybe there will be the opportunity to use the window to better effect than last time around.

To accentuate the positive, I think the players to date deserve some credit for the attitude they have displayed, at least in the games I have seen (which admittedly amounts to a derisory two from seven). Holland and Bailey together don’t look like a dream team combination, but they do ensure no shortage of commitment, while Hudson has impressed with his leadership and ability. It’s all well and good for the club to talk of still having the ambition to return to the Premiership, but financial reality holds sway at the moment. The players who remain will be well aware that a real promotion drive is not compatible with selling anyone who attracted a decent offer and it was possible that heads would drop. The way that the players have responded should at least work against some of the direst predictions for the season coming to pass.

On the other side of the coin, we have not made the sort of start and don’t have the sort of resources that suggest we will be able to contest a top two place. Wolves and Birmingham are bound to falter at some point, and Stoke and Hull are a constant reminder that anything can happen. It’s just that for us to be fighting it out at the top would require everything clicking into place and most if not all players performing around their peak week in, week out. In part due to injuries the spine of the team is actually settled at the moment, with Hudson and Fortune in front of Weaver, Holland and Bailey in central midfield, and Gray and Varney first-choice up front. Add in regular appearances by Youga, now Cranie, and Bouazza and, even allowing for the changed formation on Saturday, you have a near complete starting team. What may prove key is when Zhi, Ambrose, Primus, Moutaouakil, Todorov, Dickson, Shelvey etc get their chances and how well they take them.

It is a squad which with all fit in total stands up well against most of the rest of the division but one which is still, in my opinion, disjointed as regards key combinations. This is still more a reflection of the past couple of seasons than starting with a blank sheet of paper. There is still no obvious style of play or strengths to play to. Of last season’s promoted teams, West Brom played good football and had a proven 20+ goals a season finisher at this level in Phillips. Stoke had a (horrible) style of play but also forwards capable of exploiting it. Hull had .... OK, here the line of argument breaks down, but you get the gist.

If someone asked me today what is our main strength I would struggle to answer. I had thought that with Youga and Moutaouakil plus Bouazza and Sam we would be strong on pace and movement, especially down the flanks, with Varney running the channels. Maybe this will still work out as players get used to each others’ strengths and weaknesses, but you have to deal with reality rather than hope and I think Pardew can be forgiven for bringing in Cranie as Moutaouakil has not started the season well. I really hope he responds well to being dropped and comes back stronger. Just as I hope that Todorov is back in contention at least before long – and that Dickson doesn’t suffer from not playing enough football.

My attendance record so far this season is indeed miserable. Away on holiday for Swansea (and Yeovil) and unable to get outside London due to a mix of work commitments (well, it is an interesting time for the financial sector) and the need to placate la belle France. I honestly don’t know where people find the time to get to away games. Only I have now been to an away game this season. Andrezieux-boutheon v Lyon Duchere.

What started as a light-hearted suggestion to my French partner, that to round off a week’s stay in Lyon we should take in a Duchere game, morphed into a concrete plan. The absence of rain clinched it (don’t ask about my powers of persuasion or what this says about my partner Suzanne), so the Saturday morning visit to the market was shortened (only one pastis) and we drove the 90 minutes or so from Lyon to the town of Andrezieux. Of the town I would say little. Apparently there is a castle but we didn’t see it. There was a tourist office, but even an industrial estate in France has one of them. Basically we arrived in time for the game and not much else, so we made our way to the Stade Roger Baudras, capacity 2,500, along with a few hundred village inhabitants. Well, it wasn’t much different from Scunthorpe really (see picture).

A friend today asked me how the locals reacted to two people sitting in the stand wearing La Duchere scarfs, one of whom seemed to be rather vocal in his criticism of the referee but not making any sense – there is a certain liberty in being able to call the referee a complete tosser (et al) in the full knowledge that he could hear every word as he strode off the pitch but didn’t understand one of them. The locals weren’t exactly hostile, but they were completely bemused. I might not have been the first Englishman to visit Andrezieux, but I’m pretty damn sure I was the first Englishman to visit the Stade Roger to watch Lyon Duchere.

Andrezieux seemed as if they expected to win against a team promoted to CFA proper last season, even though before the start Duchere were just above them in the league (fifth against sixth, after La Duch’s excellent start – which after five games had seen them in third place – had been compromised by a home defeat against Martigues the previous Saturday, 2-1 to a goal in injury time). However, Duchere’s better passing and movement saw them have the better of the first 20 minutes, without creating a clear chance. As the first half wore on the strength and size of the Andrezieux players – who clearly spend a fair proportion of their day in the fields – wore down La Duch, while the referee came into his own as a complete homer (I like to think I only shout at a referee because he deserves it; in this case there was no doubt). Having flourished yellow cards at Duchere players for very little and ignored a couple of bad fouls by Andrezieux, he saw his chance with a rash challenge in the box. There was never any doubt that he would give the penalty.

Last season the hero for Duchere had been their goalkeeper. And he duly dived to his right to save the spot kick. Three people in the stand stood and cheered (as by now we had been joined by the woman who had sold us the scarves at our previous game and who seems to be Duchere’s one travelling fan – a fact explained by the fact that her son plays no 11). Relief was tempered by the fact that Andrezieux were increasingly dangerous from set plays, a la Stoke. To be fair the free kick that crashed back off the bar was a superb curling shot. And the fact that Duchere wasted their best chance as a two-against-one breakaway came to naught.

Even at the break there was the chance to mingle with the locals; and although by the time we made it to the bar the red had run out there was a passable rose available. (Charlton please note, white wine just doesn’t do it for me and if a place like Andrezieux can manage to serve red in a glass at half-time surely we can manage something drinkable.)

The second half panned out much like the first, with Duchere starting well but again getting pegged back as their forwards were unable to hold the ball and the midfield was getting outmuscled. Andrezieux had a couple of good chances but missed and as the clock ran down it was clear that Duchere were happy with a goalless draw. Unfortunately it was not to be. In stopped time a corner led to an almighty scramble and eventually the ball found its way into the net. Barely time for the game to resume before the poseur of a ref blew for full time and danced off to whichever madam in the stands he was trying to impress.

It was tough on Duchere, especially having suffered a similar fate the previous week, but they showed enough to suggest that they will hold their own at this level. They have dropped back to eighth in the table with a record of three wins, one draw, three defeats ...... OK, this is getting spooky. What other team has begun the season with that record? Is there a higher power at work? If there is, the message to me is clear. I may not have turned out to be a Jonah for Lyon Duchere last season, but my recent record for away games – Sheff Utd the season before last, Scunthorpe last season, Andrezieux this season – suggests in the interest of all I should confine myself to London or Lyon.

All that was left for us was to decline the offer (this time around) of a post-match drink with the team and to drive back to Lyon for a date with a bouchon and a bottle of red. First up a fois gras so sauvage that it seemed they had just put their hand down its throat and pulled it out (ie a bit too runny, even for me) followed by a horse steak. I kid you not. Now where after a Charlton game can you get uncooked innards followed by a steak from an animal not normally eaten?
Posted by Blackheath Addicted at 14:30