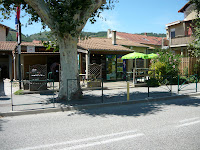 Starting off I’m struggling to find a Charlton angle - or just a seamless link to matters Charlton - with this one. But on the grounds that no issues/events are completely unconnected, I’m confident that if I rabbit on long enough the necessary will reveal itself; just a question of whether anyone else will be able to spot the join when it comes.

If you’ve been struggling through the cloud and rain of the past few days, spare a thought for those of us who took the option for a sun break. For some it involved nipping over to Spain for a couple of workouts and some team-bonding; for me it was a case of my partner Suzanne having a family party on France’s national day in Crest, just south of Valence. This provided the opportunity for a little exploration of the region, or rather selected parts. And you can hardly blame me. I don’t pretend to be a wine expert (more a consumer than a connoisseur), but a seminal moment was some years back in a good bar du vin in Lyon. I outlined as best I could what I like and the obliging gentlemen came back with a glass and said ‘try zis’. I quickly realised I could spend the rest of my life happily swimming in the glass’ contents. It was a St Joseph.

The reputation here of the wines of the Rhone Valley have not surprisingly been harmed by the propensity of the French over the years to offload on us trucks of cheap Cotes du Rhone that they wouldn’t willingly touch themselves. But when the northern part of the area offers St Joseph, Cote Rotie, Hermitage, Crozes-Hermitage and Cornas (which I was not previously familiar with but took the opportunity to sample and tuck away a couple of bottles for the future) I’m not sure there’s a better concentration of desirable options anywhere else on the planet, at least not for someone who to date hasn’t managed to acquire a taste for the subtlety of a Bourgogne or the wallet for good Bordeaux. That said, I’ve bought quite indifferent bottles of St Joseph in London and having seen some of the vinyards you can understand why. Dotted on the hillside it would seem that the variations in sunshine and rain can result in ordinary years (the woman in one cave responsible for selling the stuff visibly turned up her nose at the 2008 vintage, which was correctly set at half the price of a 2009 or 2007), while the different terroirs of the various producers deliver different variations of flavour despite the pure Syrah origins. I’m just going to have to do a lot more serious (practical) research; but I’m learning and am full of enthusiasm.

By spending a little time in the area I managed to unearth the best bar in the world – and the best school. Taking a leaf from the French, who are nothing if not sneaky when it comes to hiding their true assets, I’m not going to state where the bar is. As the picture shows, it appears nondescript, but when I asked for a glass of red wine the response was ‘we only serve St Joseph’. I’m not sure I will ever find a bar to compete. And just along the road was the Ecole St Joseph. The mind boggles as to what the curriculum entails. A bit of colouring and spelling then off for the day’s tastings of vintages. Pre-Thatcher English schooling gave me curdled milk.

So, we now know where to find the best bar and best school in the world. But do we yet know if we have the best team in League One? Clearly at least not yet, but it is possible this will prove to be the case. I don’t think anyone would have made such a claim a year ago. At the Welling game a fellow Addick was sounding quite downbeat on the signings made by Sir Chris, seemingly on the grounds that they were players largely drawn from our current peers rather than attracted away from a higher level and that they pointed to a standard playing formation rather than the adoption of a Barcelona approach (or more realistically Brighton). I often have my rose-tinted glasses on (La Vie en Rose once more) but I don’t agree. For me there’s a good balance among the incoming of youth and experience and the indication that we will play a consistent and increasingly familiar (for the players) 4-4-2 week in, week out, with the emphasis on tempo, fitness and balance. Then it’s about getting the best partnerships in the key areas and ensuring we have sufficient cover.

It might be argued that we have lost players to either teams in the top two divisions (Racon, Jenkinson, quite possibly Llera and Reid, along with the loanees returning to Premiership clubs – Parrett, Nouble, Eccleston) or those around us (Semedo, Anyinsah, still possibly it seems Francis). At face value that might suggest a loss of (relative) quality. Fact is they didn’t work out for us in the way we’d hoped and while the process isn’t complete – and can’t be until we know what will happen with Francis, McCormack, Dailly et al and whether there will be further additions – it seems to me on the admittedly thin evidence so far that a number of those brought in are on an improving path with a good attitude. It’s a bit unfair on the two, but I remember being struck by the programme notes early last season from Benson and Abbot. The former mentioned that as a trained accountant he had a career to fall back on if it didn’t work out in football, while the latter acknowledged his journeyman status (adding that he thought he’d always done a good job for his many clubs, except Swansea). We’ve already heard rather more ambitious comments from the new batch.

It does have to be pointed out that despite the addition of 13 new signings (including Sullivan returning on a permanent basis and Pope), the exit of an equal number (more if Dailly, Llera, McCormack and Francis) means we are no stronger in terms of actual numbers. But of those having departed, five were loan players. While we presumably avail ourselves of the odd loanee this season too, it is hard to see us depending on them to the extent we did last season (or the season before). Should help with consistency and continuity.

If you had to pick a team right now to kick things off, some things would seem clear. I don’t know which of Elliot or Sullivan will get the nod in goal, but at least we’re covered (barring any substance to the rumours that Elliot might not be happy if he begins as number two). Clearly right-back’s an area of uncertainty, with speculation of a new signing but Francis’ inability to agree terms with Bournemouth complicating things, with these rumours suggesting that Powell doesn’t want to rely just on Solly. Left-back seems a straight choice between Wiggins and Evina, presumably the former (with the latter perhaps cover for both left-back and wide-left); I haven’t seen any confirmation but presumably Youga isn’t coming back. Central defence is currently two from Morrison, Taylor and Doherty, with Dailly maybe still making up the numbers (and Mambo still developing).

The clean sweep approach to central midfield suggests that the two places will be contested by Alonso, Hollands, Stephens and Pritchard, with Izquierdo also a contender on the evidence to date. What I do like the look of is the prospect of Jackson and Green providing the width (with Wagstaff appearing for now to be the back-up, Harriot developing as well). One outright winger able to cross well and one more of an all-rounder, both capable of making a decent contribution to the goals tally. Does it carry echoes of Robinson and Newton (if not the old Man Utd combination of Coppell and Hill)?

The obvious problem is up front, ie what happens if Wright-Phillips gets injured? Hayes and Benson are shaping up as possible partners for him, but without BWP would we have the necessary cutting edge? Benson was brought in as the outright goalscorer but now seems to be being asked to operate as more the provider/target man, while it remains to be seen whether the trialist Williams will come on board. Again, its early days, but a Hayes-Benson partnership up front if Wright-Phillips is unavailable looks unlikely (and pertinently hasn’t been tried by Powell in the friendlies to date). If there’s one more important addition to come this would seem to be the area.

So now the sun is a distant memory, which for me means back to work and for the players a trip to Aldershot. The recently-confirmed replacement of Reading for the 26 July Valley friendly with FC Den Bosch would be an attractive prospect – had not various factors combined to ensure that next week will see me make a work-related trip abroad, to Amsterdam of all places. Reminds me of the only possible definitive proof of the existence of God (and his sense of humour), the true story of how some nuns in Ireland saved for years to fund a trip to Rome to see the Pope, only for it to turn out that the week they were so looking forward to was the one he spent visiting Ireland. He/she is said to move in mysterious ways.
Posted by Blackheath Addicted at 22:02

Check out Lirac if you get the chance whilst on the Cote du Rhone track. Ignore the rose, go for a nice heady red. Heaven in a bottle.

Good to see that you are back BA.
Swedeaddick

Floyd, thanks for the advice. I'll definitely check out the Lirac, which I've never encountered, and will happily dive straight into the red. I'm informed by Suzanne that it comes from around Gard; she's already started planning a trip to the Pont du Gar. Ain't life a bitch.