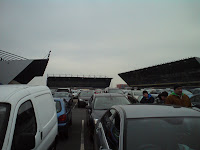 In years to come we will sit around the fireplace, laughing through the DVDs of the horror years when we dipped back into the third flight, and compare notes on how close to Rochdale we made it before hearing the game had been postponed. If truth be told it wasn’t really 25 miles, that just made a better headline. But having set off around 08.00 we’d gone past Walsall and were resuming the relentless drive north after a coffee break, sometime after 11.00. In fact we were just debating whether this game could attract the least media attention in the club’s recent history, given the cup ties going on, when the radio mentioned Rochdale. It couldn’t be a special report on Sir Chris’ second game in charge, so we didn’t really need to hear confirmation.

My immediate thoughts turned to ‘back to bed by 14.00’ (followed shortly after by wondering why on earth I had made the late decision to go to The Valley on Thursday to buy a ticket; I’d even missed the train I went for, someone had been trying to tell me something). But sometimes you find yourself in a situation you can’t control. I was in a car with two fellow Addicks (and two of their offspring), both committed to the cause of taking in as many football grounds as is possible in the space of one lifetime. In fact, one is involved with the site dedicated to doing the lot (http://www.doingthe92.com/). Without a moment’s thought their reaction was: another game and another ground. The most I could do was turn thoughts to somewhere south of where we were rather than continuing north, in the interests of the eventual return time. We managed to narrow the choice to Stevenage v Reading in the cup (but with some doubt about getting in), Walsall v Bristol Rovers (and another chance to boo a certain Blizzard), or Oxford v Cheltenham in League Two.

We’d all done the old Manor Ground (for a game that led to my receiving a letter from a certain Ian Maxwell when the club had dodgy owners and I was indirectly working for Captain Bob). But the Kasaam Stadium meant another tick in the table all round and for me represented the second-best option after an afternoon on the sofa. So that’s how a photo of the functional but rather non-descript – save for it being a three-stand ground, with a car park behind one of the goals - Kasaam Stadium finds its way onto this site.

It proved to be an enjoyable enough game, albeit it was a tad on the cold side (and timings meant that thoughts of a decent pub lunch in the centre of Oxford, to at least partially compensate for being deprived of the Rochdale pie I was anticipating, went by the board). It doesn’t merit a full report, but the spoils were shared as Cheltenham, who started both halves the brighter and had the livelier forwards, saw an early lead wiped out. Oxford had enough of the second half to have won the game, forcing a couple of excellent saves from Chelthenham’s Elliot-lookalike keeper, but ended up being grateful to their own custodian for saving a penalty late on, awarded after one of the said forwards turned well in the box and got flattened.

All that was left after that was to sit in the car while every other vehicle funnelled out of the one exit of the designated parking area. Ah well, another Saturday in the life of an Addick.
Posted by Blackheath Addicted at 17:54

Forward planning would be the key. Next time take a rug and a good bottle of red and we could leave you in the car while we go to watch the alternative match. A three-sided ground, 45 minutes to get out the car park, but still a better option than going to Selhurst Park