Further Ramblings On A Special Day

Is there anything sensible to add about yesterday? Not really, but that’s never stopped me before (and it does provide a rather spurious excuse to put up another photo). Perhaps best to start by saying that the day wasn’t perfect or without regrets. The eggs, bacon and black pudding at the service station was pretty ordinary and not worth the money (basically I should have known better); in Barnsley on the way to find a relatively inviting pub I walked past a bookies advertising odds on the game (3-1 to them being prominent) and didn’t have the foresight or conviction to put a few quid on us winning 0-6; and during the game some passes went astray and some shots missed. Then again, these are probably too few to mention (I will sooner or later run out of regrets clichés, but not yet). Oh, and I have a completely redundant photo as I took one of the scoreboard when it read 0-5.

Thankfully the game passed with no serious Thatcher/Scargill chants (a few of ours tried to start one for Thatcher but with creditably very few takers and it very quickly petered out; there’s no prizes for suggestions as to just how a daft one minute’s silence would have passed off, with Barnsley miners’ flags prominent around the ground). With not a great deal of tension regarding matters on the pitch in the final half-hour, there was the opportunity for some rather more enlightened singing; my favourite was ‘4-0 and even Pritchard’s scored’. There wasn’t much directed at the Barnsley fans, most of whom stayed to the end and continued to back their team (no boos at all please note, although whether their reaction would have been so understanding if the game had been mid-season is another matter). I think we all felt that we’ve been there too and were more intent on enjoying the occasion than wallowing in others’ misery.

As for the records broken, well aside from the obvious ones I’ve never seen a game which produced two red cards and no yellows. When was the last time we had six different scorers in a league game? And when was the last time that a text request was answered so quickly? At the break, at 0-2, my French partner Suzanne sent one to say that Kermorgant had to score. It took him about three minutes to oblige.

I can’t remember a season when in the space of 14 days we’ve gone from being all set to end a game outside the bottom three only on goal difference (if we’d lost to Bolton) with seven to play, only to sit ninth and just six points off the play-offs. And one when a team (as it happens Millwall) could at this stage of the game still either get relegated or make the top six. For the record, the bar for guaranteed survival now stands at 62 points, or five from four for us; more realistically, the website I was informed of gives us a 0.1% chance of being relegated if we lose the last four (see, not certain yet) and zero if we get another point. For the first time in a while our odds on going up are better than those on going down. Four wins, 69 points, and the site gives us an 8.7% chance of making the Premiership (presumably incorporating the play-off options).

OK, we know in our hearts (somewhere, deep down) that an extension to the season isn’t likely. But that didn’t stop me checking out the dates this morning. Thankfully a week away in Lyon in May which I rashly booked wouldn’t compromise anything (I leave after the two-legged semis and return on the weekend before the final). Suzanne is ready to return to London with me if we make it. After all, we only have to take it one game at a time, as we are always told, starting with being real party-poopers on Tuesday night.

Talking of party-poopers, who on earth are Raon l’Etape (apparently the town is known as the ‘Gateway to the Vosges? My adopted French team, Lyon Duchere, have turned it around with three wins and two draws in their last five to revitalise their promotion bid. And those that were around them – Grenoble, Moulins, Strasbourg and especially Mulhouse (who seemed set to win the league but have won just one in five) - have faltered, with Duchere moving above them. However, Raon l’Etape have reeled off five wins in a row and now top the table, one point above Duchere with a game in hand (which guarantees them at least one point in CFA Groupe B). There’s six games left (seven for Raon l’Etape), so it could change again. Duchere may have to win them all to grab the one promotion spot, just as we may need to if we are to grab sixth. 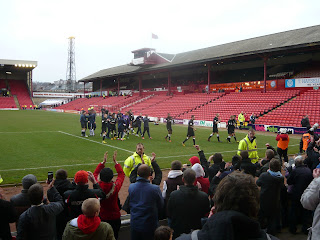 Posted by Blackheath Addicted at 15:33