Not A Bad Day's Work

I have to admit that over the years I’ve chosen worse daft away trips. Ahead of the Bolton game, the decision to get tickets for Barnsley away was motivated by the prospect of it being a crucial contest, with a leap of faith required at a difficult juncture (one which after 20 minutes of the Bolton game seemed a good deal more difficult). To say that the day turned out well enough is perhaps an understatement. I’m happy to wait for confirmation of just how many records were broken, and for now will settle for the facts that I’ve never before seen us win 6-0 away from home; and that undoubtedly I’ve never before felt more confident with 20 minutes left. Even for a wizened old git it proved to be a bit special.

There had been enough time to sink a decent espresso before we headed off just after 09.00, but I have to confess I feared the worst. Two wins and a draw had taken the edge off our struggle, but with Barnsley in good form and still in desperate need of points I thought they’d edge it in the motivation stakes. There was general consent in the car that a draw would be a decent enough outcome. What we hadn’t counted on was a balancing of a fair bit of bad luck at home through the season in one afternoon, including a Barnsley goalkeeper who will be keen to erase the highlights from his season’s DVD, plus what has to go down as an exceptional performance from us by any standards, on a blustery afternoon which made controlling the ball difficult but ended up working to our advantage.

The team showed no changes, in the starting X1 or on the bench, with Haynes and Cort still absent. And after settling into good if a little exposed seats and enjoying the exchanges between the Charlton contingent and the Barnsley mascot (‘get yourself a proper job’, which he took in splendid good spirit) the game had barely begun before we went ahead.

The ball was played across the box from our right side and I suspect Kermorgant had a shot on the turn, which their keeper parried but only into the path of Pritchard. He hasn’t been in the right spot at the right time too often this season, but this was to prove a day of exceptions to the rule and he buried it. That settled us down nicely and although Barnsley had decent possession they lacked strength up front on a day when passing wasn’t easy. After 20 minutes we broke up one attack, and with Barnsley appealing for a foul moved it out quickly once more down the right. A similar ball in saw Jackson coming in on it and after his first effort was blocked once again the rebound fell kindly and Jackson didn’t need another invitation.

If there are turning points in a 0-6 victory they came in the following period. Barnsley belatedly realised that the conditions meant that this was a day for simplicity in defence and power up front and made a change to bring on a big forward. For a while it changed the game as he caused us problems. After a couple of efforts they had one chance which Wiggins (I think) hacked off the line. If that had gone in, the half-time talks would have been very different. As it was, the moment passed and just a few minutes into the second half the game was effectively won.

Good work down the left by Wiggins and Harriott produced a peach of a cross which beat their keeper but not Kermorgant, who positioned himself to ensure that nobody could get in his way. The header into a vacant net was powerful, but what was impressive was the way he made sure that nobody else could get near it. Whatever encouragement and belief that Barnsley had come out for the second half with had just gone out of the window. And if they felt bad enough already, it wasn’t long before it got worse for them. And worse. One swerving effort was well parried by Hamer and Harewood came on to give them more muscle up front; they had no option other than to press forward and that was giving us the space to exploit. Harriott hared down the right and opted for a fierce but eminently stoppable shot, only for their keeper to make a complete howler and let it slip through his grasp at the near post.

If winning 4-0 away was good enough, pretty soon we’d be playing out the game against 10 men as a loose ball saw their guy dive in on Kermorgant. It looked like a very bad challenge and there can be no question about the red card shown. After that it was a case of whether we’d score more – and plenty of opportunities came and went as Fuller decided he needed to be on the scoresheet, as Obika (who’d come on for Kermorgant, with Gower replacing Jackson) tied them up in knots, and as just about everyone else wanted to get in on the act. Our final change saw Kerkar replace Harriott and with almost his first touch he made it five. Played through, he finished with aplomb.

There was still time for a run through on goal to be blocked unfairly, with the ref seemingly giving nothing but the linesman flagging for a foul, which in turn gave the ref no option other than to show another red card. And with just about the last kick of the game Fuller finally got his goal, curling one in from the edge of the box.

You had to feel sorry for Barnsley as nobody could have predicted the afternoon’s events; and many of them loyally stayed to the bitter end. But it was our afternoon and the final whistle saw them exit the field quickly and the team and Sir Chris and staff move enjoy a love-in with the Charlton fans. Days like this don’t happen often (especially as the drive back was to the sound of the FA Cup commentary).

That’s it for now. No time for player ratings as there’s a takeaway with my name on it (it was a long drive back). In any event, what can you do after a 6-0 away win, one that all but mathematically ensures survival, but give all of them a 10. Tomorrow we dream of the play-offs. 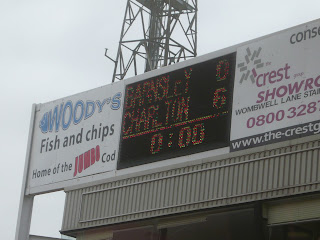 Posted by Blackheath Addicted at 22:15

Got to love that snap of the scoreboard. Green with envy that I was wasn't there.

Fantastic. Just shows when you wake up in the morning with match tickets you just never know what is in store - the beauty of being a football fan, specifically a Charlton one! Great stuff BA.