Reds Win Out (And The Frogs Weren't Bad Too) 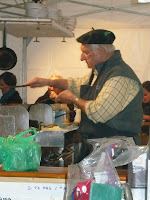 People always talk about remembering where they were when Kennedy was shot, when Armstrong landed on the moon etc. At least I can say with confidence I will be able to remember where I was when Charlton beat MK Dons 5-1; I won’t have much memory of the precise details, especially as my tasting notes degenerated rather through the process (from ‘delicate, hint of violet’ etc all the way down to ‘bloody nice drop’). But as the texts on Saturday came flowing through I was located underground in Beaune at the Marche Aux Vins sampling 10 different Bourgognes wines (actually more like 10 x 2 as my partner Suzanne is perfect company on such occasions, preferring to take a sip and pass on the remainder), having previously gorged on a plate of fried frogs from one of the market stalls. A French man wearing a beret cooking frogs (as per photo); he only needed the garlic necklace to complete the picture.

So, for the sake of posterity here is my account of the game:

Team details came through by text as a Savigny-les-Beaune 2007 was being sipped. Not surprisingly the tastings began with the more basic stuff (and the whites, which are not my usual tipple). Something of a vin ordinaire for me, but at least it was clear at this stage that Parkinson was sticking with 4-4-2.

As I was informed that Bailey was starting in the centre with Racon moved to the left of midfield we had moved on to a Meursault 2005. A bold move to accompany the most enjoyable of the three whites. As a youth with a leaning towards the books of Camus I had invested in a bottle of this stuff (OK, the spelling isn’t exactly the same but it’s close), only to be disappointed by the lack of body. Probably this was the start of my preference for full-bodied reds. But with age comes appreciation and this time around the glass(es) were finished off with relish.

‘0-1; merde; intercepted back pass in the wind’. This was to be the low point of the afternoon as a Chassagne-Montrachet 1er Cru (Les Vergers 2005) lacked just about everything and tasted a little too sharp. Things had to get better.

‘1-1 Mooney!’ By now we had moved on to the reds and first up was a Gevrey-Chambertin 2006. At least normal service was being resumed with a complex and agreeable glass made all the better by a second as it failed completely to impress Suzanne. The world seemed a better and warmer place.

‘Should be 2-2; looked like our man handled on his own line’. From the BBC website highlights I assume this was the outstanding non-handball block, but at the time I was holding a Chambolle-Musigny 1er Cru (Les Feusselottes 2004). Proved to be something of a holding operation as I noted it seemed unexceptional for the price and for Suzanne it was only a little better. It seemed the afternoon could go either way.

‘2-1 Bailey!’ Now we were cooking, with a Hospices de Beaune 1er Cru (Cuyee Guigogne de Salins 2002). By now the tasting notes were brief and to the point, demonstrating both a lack of wine vocabulary and a reluctance to do more than scribble a few words (‘not bad but even more pricey’). At least things were moving in the right direction, if a little unsteadily.

‘Another handball by us in our box that we got away with’. I’ll drink to that. Hospices de Dijon Pommard 1er Cru 1999. This one saw a glass raised to the ref and the scores for the wines were picking up.

‘HT. Not sure how no more goals were scored. Very windy and chaotic, pitch covered in leaves, both keepers made top saves; end-to-end stuff’. Still had the impression we weren’t hitting the heights as a Corton Grand Cru 1982 looked impressive (with the price per bottle now up to EUR110) but failed to really deliver. Jury was still out on the reds as we moved towards the real stuff.

‘3-1 Sam!’ A Chambertin Clos de Beze Granc Cru 1974 saw some distance put between the earlier rather mixed experience. At EUR290 a bottle it should have done, although it seemed some were still not satisfied as some of the locals were using the spittoon and complaining that it was not fully finished.

‘4-1 Sojde heads in corner’. This was sending me to heaven as an Hospices de Beaune Savigny-les-Beaune (Cuvee Fouquerand 1964) was undoubtedly the best of the bunch. By now the notes amounted to a big tick, but I do remember having to prise this glass from Suzanne (on the spurious grounds that she really likes dessert wine and wouldn’t truly appreciate the contents, that she had to drive later, that we were winning 4-1 ...)

‘5-1 Burton!’ This news was digested while sitting outside having a good cigar as the head was somewhat light. What followed was some confusion on both sides of the Channel: ‘We’ve got another Sodje on the pitch now; where did he come from?’ Sorry, but don’t ask me, I’m headed back for a pastis and another plate of frogs.
Posted by Blackheath Addicted at 10:27

nice one BA, sounds like a good time was had ;-)

Great stuff BA. The wine drinking/ tasting? sounds the perfect way to spend an afternoon whilst being updated on every glorious Charlton goal.

Come on, tell the truth - you were really in a pub in Woolwich trying the wine served from those miniature plastic bottles. The bloke in the beret frying frogs was from Central Casting.

That is a great photo.