Robbed By The Ref 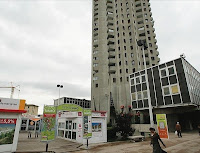 Last night’s game was another reminder of how cruel a game football can be. Losing to the odd goal is always tough, but when defeat comes courtesy of poor refereeing and a creditable draw is snatched from your grasp deep into stoppage time it’s hard to take. Johnstone’s Paint Trophy? Don’t make me laugh. This was the far more important clash between Lyon Duchere and Olympique Lyonnais B, Lyon’s version of the local derby.

With the game staged on Remembrance Day there was the pleasant surprise when arriving at the Stade de Balmont (actually arriving at the Stade de Balmont for the second time, as an error on a website had led us to believe that the game kicked off at 5pm rather than 6pm) to discover that entry would be free. Perhaps a precedent for our local derbies? Nah, I’d need actual payment to go to the New Den and just what incentive would be sufficient to justify a return to Selhurst Park is beyond my limited imagination, should there ever be another game with them. Enough to encourage a decent enough crowd, one that even managed to periodically break into song, encouraged by the Duchere bench (the local chant perhaps lacked the inherent beauty of Valley Floyd Road, but went something along the lines of ‘we live in Duchere and we are going to win’, something akin to Manchester City stressing their local roots when playing the prawn sandwich eaters).

When the teams took to the pitch it was hard to avoid the ‘men against boys’ cliché, with OL’s second string clearly having the height and weight advantage. That impression was strengthened when it was pointed out that in the OL ranks was a certain Jean-Alain Boumsong. Having strutted his stuff for Rangers, Newcastle, Juventus and the French national team, the whole event seemed something of a culture shock for him and in the first half especially he proved to be something of a secret weapon – for Duchere. Put simply, Boumsong was absolutely dire. The only other piece of team news I was able to glean from locals was that the regular Duchere goalkeeper – who had been outstanding in the games I have seen and has contributed significantly to a very low goals conceded tally over the past couple of seasons at least – was injured and that his replacement, having waited patiently for years for his chance, was desperate to play well (which he was to do). Carried echoes of the long-suffering understudy for Sam Bartram.

Duchere started the game well. The manager, Karim Bounouara, is clearly continuing to demand a passing game for the side and OL were slow to pick up the threat. An early through ball was headed for the OL keeper before Boumsong managed his first interception, stopping the ball and falling backwards to leave the Duchere forward through on goal, but the shot from a tight angle was just wide. Duchere were then awarded a free kick just outside the box and an excellent Jensen-style effort was just turned round the post by a very competent OL keeper. Then Boumsong repeated the interception trick only for the OL keeper to save again. Next time around Boumsong had clearly learnt his lesson and allowed a cross to go through, except this time the ball was never going to reach the keeper and the Duchere forward duly got on the end of it, only for the effort to produce another decent save.

After the early enthusiasm it was perhaps inevitable that OL came more into the game and started to dominate possession. They had speedy wingers and one move down the left produced a low cross and havoc in the Duchere area, then the Duchere keeper was called on to make a double save, the second saw him bravely smother at the feet of an inrushing forward. At this stage I was starting to resign myself to never actually seeing a goal for La Duche (this was my fourth game) and for a 15-minute spell it seemed only a matter of time before OL took the lead. But Duchere rallied and worked their way back into the game. And finally the drought was ended. OL’s height advantage was to count for nothing through the game as the quality of Duchere’s crossing and the incompetence of Boumsong meant an ever-present threat. A corner from the left was glanced goalwards and the ball came back off the OL keeper to be buried by a Duchere forward (please don’t ask me for names).

All that was left for the first half was further evidence of Boumsong’s total frustration. He moved forward to meet an innocuous high ball and put in a thunderous header, only for his momentum to see him almost demolish the Duchere player, who ended up in a writhing heap on the ground (does anyone else remember Steve Thomson nearly breaking Nail Quinn in half when falling on him in a Charlton v Arsenal game?). The ref inexplicably awarded Duchere a free kick, leaving Boumsong with arms outstretched as if to say ‘I can’t help being an enormous bugger’.

Duchere had had the better of the first period and were deservedly ahead at the break. But this is a team that doesn’t score many – and concedes fewer. It is also one which was humbled 1-5 in the corresponding fixture last season and seemed well aware of the bragging rights involved in a local clash. Coupled with an obvious touch of the hairdryer treatment for the OL players, this translated into a more cautious approach in the second half, with OL taking the initiative. After about 15 minutes some uncertainty led to an unnecessary corner given away and the curling delivery was met with a header into the net. Equality, if not liberty and fraternity. OL then sent on a substitute, one who had the pace and trickery to cause problems for the remainder of the game. About 10 minutes later OL worked the ball into the box, played it into the sub, who managed to turn and put it away.

It was hard to see Duchere coming back from that, with OL celebrating as if they had managed to get through the Champions League quarter-finals (which usually mark the end of their European campaigns) and the locals seemingly resigned to defeat to the affluent and upmarket neighbours. OL certainly thought they had the game won. But with about five minutes left on the clock the ball broke in the box to a Duchere forward who shot low into the net. Suddenly an honourable draw was on the cards. However, an increasingly fussy and inconsistent ref (is there any other type?) began to impose herself (yes, I mention that it was a female ref, for no other reason than it is the truth) and with Duchere ready to embrace the final whistle she started to give OL a series of free kicks. We were in I think the sixth minute of stoppage time when a corner was awarded. Surely the final act of the game. Duchere committed the cardinal sin of making a substitution at a set piece (bringing on a tall guy for obvious reasons) and perhaps inevitably a knock-down fell to an OL player and it was struck into the roof of the net.

The ref didn’t quite blow for full time at the kick-off but it was mighty close (why is it when they have clearly erred over timing they allow play to continue to suggest that they were not mistaken?). So there it was, a 2-3 reverse for Duchere. On the downside there are no bragging rights for this area of Lyon for a while yet, La Duche’s habit of conceding late goals (on Sunday they did the same, drawing 1-1 at home against Grenoble-Villeneuve) continues, and their habit of conceding late goals when I am in attendance continues (two of my four games have seen them lose in stoppage time). But on the upside, Duchere look stronger and better than before and are likely to continue to improve, to establish themselves as the city’s second team. The club has a site (http://duchere.footeo.com/) and a sponsor. Unfortunately it is stuck with a Jonah in the form of a sometimes visiting Brit (and from the comment on a previous post it seems I am not the only Addick to back Duchere), but the future looks bright, for the club and the area. I have posted the photo not because it is likely to attract visitors to the area (it is the least flattering photo imaginable) but because it includes Tour Panoramique, where my partner Suzanne lives. The Duchere area, which stands on a hill to the north-west of the centre of Lyon, is being extensively redeveloped and should look much better in a few years.

So, despite the cruel injustice of it all there are grounds for optimism. Just as well really as it’s in short supply on other fronts. I left for France very early Sunday morning and am claiming complete ignorance of anything that might have happened in the FA Cup. It may be that it simply didn’t happen. Suzanne and I are headed off to Beaune tomorrow to take in the pleasures of the annual wine auction sales, will return on Saturday in time for the first leg of Ireland v France and then its back to Blighty for me on Sunday. I shall be there in spirit at least for the MK Dons clash (or should I say, given my prospective location, that I will be in spirits). Suffice to say this one isn’t about formations and team selection, it’s about character. A win by whatever means, however ugly, is what is required to stop thoughts of this season going very much the way of our first back in The Championship. I will be drinking to it.
Posted by Blackheath Addicted at 09:14